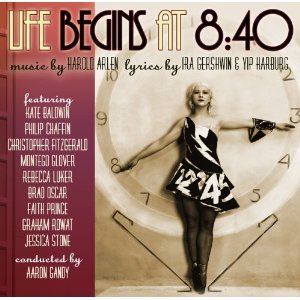 Life Begins at 8:40. Music by Harold Arlen, lyrics by Ira Gershwin and Yip Harburg. This PS Classics recording is based on a concert presented in March 2010 at the Library of Congress. That performance featuring a full 24-piece orchestra conducted by Aaron Gandy and a cast of Broadway and recording veterans including Kate Baldwin, Philip Chaffin, Christopher Fitzgerald, Montego Glover, Rebecca Luker, Brad Oscar, Faith Prince, Graham Rowat and Jessica Stone has been stunningly preserved in this new studio cast album. The witty and effervescent score (set to the original orchestrations by Hans Spialek, Robert Russell Bennett and Don Walker, faithfully restored by Larry Moore) is brought vividly to life in this world premiere recording. Release date: June 8, 2010